This blog contains pictures of my penis. The pictures are intended to help people having the same surgery know what to expect.

If seeing a penis will upset you then you should go somewhere else.

I’ve added some photos showing the current state of my penis. These are, of course, not suitable for work.

There’s still quite a curve when it’s erect and I can feel it stretching inside but it’s not painful. Sensation along the scar is still odd, occasionally stabbing pains and it’s quite unpleasant if anything rubs on it. The scar is actually much less red than the camera’s flash makes it look.

The lumpy part of the scar in my mouth has gone, now all I can feel is a line along the inside of my cheek.

I’ve added a page with some references to articles and studies about urethral strictures and their treatment that I found useful while I was dealing with doctors who weren’t very familiar with the subject.

Knowing when they don’t know what they’re talking about is very useful. It also gave me some reassurance that I was making the right decisions about my treatment.

I got an email today from someone who’d found this blog and reminded me that I hadn’t updated in a little while (I tried to reply to him but there seemed to be a problem with the email address).

Things are going quite well. The wound is becoming less visible and also less sensitive, it’s now mostly just feeling kind of odd when touched rather than slightly painful as it was before. I get occasional random twinges of pain, especially in the part of the wound on my scrotum but I’m assuming this is all just part of the nerves regrowing.

Peeing still stings a bit sometimes but that seems to be getting better too. I’ve also tried some gentle sexual activity and that hasn’t caused any problems. The internal scarring/swelling is still causing quite a severe bend to my penis when it’s erect and that’s something I’ll talk to the doctor about at my follow-up appointment in a few weeks.

When I get a chance I’ll take some more pictures and upload them. I’m also planning a post with some of the useful studies and papers I found.

I’ve now had a couple of days without the catheter and it’s going well. I get a good flow with I’m peeing, no dribbling afterwards and only a little bit of stinging pain now. In fact the pain is less than before the surgery.

There hasn’t been any bleeding since Thursday and the bladder spasms at the end of urination are now pretty much gone. The suprapubic catheter wound has closed up and seems to be healing well, although it’s still a little sensitive to pressure.

I was kind of excited and nervous all day, sort of more nervous that before the urethroplasty, because it was the day I’d find out whether I’d be rid of the suprapubic catheter.

After lunch I took the bus up to the hospital and after a short wait it was time to change into one of the lovely hospital gowns and go into the fluoroscopy room. This time we could skip all the messing around trying to squirt contrast up my urethra and just run it in through the suprapubic catheter. It took over an hour anyway but I managed to get over the weirdness of peeing on demand while lying under an x-ray machine and they got some good pictures.

In the first picture you can clearly see the stricture before the urethroplasty (but after the urethrotomy). “Mynning” is the tip of my penis and “kateterspets” is the end of the catheter they were using to put contrast in. All the stuff around the tip is the hand of the nurse who was holding everything in position.

The next two are the new pictures after surgery. You can see that my urethra is now a decent width all the way along. There’s a slight narrowing marked around where the graft is but it’s possible that was just a blood clot (a big lump did come out while I was peeing).

After x-ray it was time to go down to urology and see what the surgeon thought. He seemed very happy and said they’d remove the catheter. He was also asking about how the graft donor site in my cheek was doing. It seems he was used to putting in stitches but had left it this time on advice from his visiting colleague. From what I’ve read having stitches is much worse from a patient’s perspective and my cheek has healed quickly and well. I asked him when I could start having sex again and he said I could as soon as I felt ready. When I pressed him a bit he said maybe waiting another couple of weeks would be a good idea.

The nurse came to remove the catheter. After she cut the stitches holding it in place I felt a tug and thought it was out. Then there was another tug. Then a long pulling sensation. It seemed that there was roughly 20 cm of catheter coiled up in my bladder!

It was so nice to be able to walk home without the catheter irritating my bladder and to sleep without worrying about tangling catheter tubing. I really enjoyed my shower this morning.

Peeing is also a joy, with a good strong flow. There’s still a little bit of stinging and some bleeding afterwards but that should pass.

I’m doing an AMA on Reddit about my stricture and urethroplasty, feel free to ask me anything!

Anyone who has had a catheter can tell you that they’re a nuisance. It takes a while to work out a way to sort out all the tubing so that it’s comfortable. In my experience so far I usually figure it out just before I get rid of the catheter.

This time around I’ve figured out that the mesh “sock” thing is the most comfortable for holding the bag but if I’m walking it slips down my leg too easily. The velcro/elastic straps hold it in place better but get uncomfortable after a while.

So here’s my solution for when I’m going to be walking about a bit: 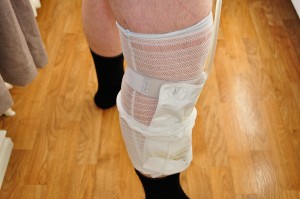 That’s the “sock” with the upper strap on top of it, just below my knee and the top of the bag held up by the strap. I don’t use the lower strap, the bag is held close to my leg by the “sock”.

I have the bag on my lower leg because there tends to be more space in my trousers there, rather than up around my thigh. When I first got out of the hospital they gave me a leg bag with tubing cut so short I had to have the bag high up my thing, which also made lying in bed difficult.

The suprapubic catheter they put in (held in by stitches) before I was discharged from the hospital is a bit different from the others I’ve had. It has two separate parts: the narrow catheter tube itself (clear silicone) and the adapter to connect it to a drainage bag.

Unfortunately the two parts can be separated quite easily and this occasionally happens if the catheter tubing slips through the adhesive catheter holders. On Tuesday morning it pulled off and I didn’t notice until the urine had soaked through my t-shirt. This time I’ve arranged it so that one catheter holder is holding the adapter and the catheter tube has plenty of slack.

I got an appointment for the cystourethrogram for Wednesday the 10th. After that the doctors will be able to decide whether my urethra has healed and isn’t leaking. If everything is OK the suprapubic catheter will come out and I’ll be back to peeing normally.

I also got an appointment with a nurse on Monday the 8th. There was nothing to say what the appointment was for so I contacted the urology department. It turns out that they’d messed up the scheduling and the nurse was going to remove the suprapubic catheter before the x-ray appointment. They fixed it so that I’d just go up to urology straight after the cystourethrogram.

I’d thought the worst of the night-time erection pain was over, but in the early hours of Thursday I woke up with one and was just dozing off again when I felt three sharp pains inside my penis, along with a strange snapping sensation. I’m assuming it was some of the remaining stitches that had partially dissolved and were snapped by the tension. Since that I don’t get any pain with erections, just a sensation of tightness along the urethra.

Things are starting to look more normal, the scar is fading nicely with just one reddish patch. I can still feel inflammation along the whole repaired stretch of urethra but I had the same after the urethrotomy and that seems to take a couple of months to go away.

The bladder spasms came back with a vengeance on Tuesday, with quite a bit of leakage through the urethra. Even worse on Wednesday. It felt like my bladder was full when I woke up and there was very little in the night bag. The leakage also caused some pain and bleeding in my urethra.

My husband somewhat forcefully arranged an appointment for me at the urology clinic (it’s sometimes very useful being married to a doctor). I was seen within ten minutes of arriving at the hospital and the nurse flushed out the catheter and spoke to a doctor to get me a prescription for tolterodine for the spasms.

The flushing and drugs seemed to work. I had a few spasms later in the week but they were much milder and didn’t cause leakage.

My penis was looking less swollen and the bruising was almost gone. With an erection there’s a noticeable downward curve that it didn’t have before. I’m hoping that will go away once all the stitches have dissolved and the internal swelling has gone. The external stitches had all come out by the end of the week. The scar on my cheek is still irregular and noticeable but not giving me any trouble. Click here for photos.